Get a dose of the TREASURE effect with Shopee’s 7.7 Mid-Year TV Special! In case you haven’t heard, TREASURE is a K-Pop boy band that debuted with their very first single album on August 7 of last year. As they gained popularity with their catchy songs that will make your heart flutter accompanied by their combined talents, they are known to be the fastest South Korean act to be part of Billboard’s Social 50! But they didn’t stop there! On top of that, they managed to bag other awards too such as the “Best New Male Artist” during last year’s Mnet Asian Music Awards and “Rookie Artist of the Year” at the 35th Golden Disc Awards. With 12 members in the band, you’ll surely have a hard time choosing your bias! The TREASURE K-Pop group will surely steal your heart!

Are you ready to say “Saranghae, TREASURE!”? We are! Read on to find out what Shopee has in store for you and all TEUMEs. 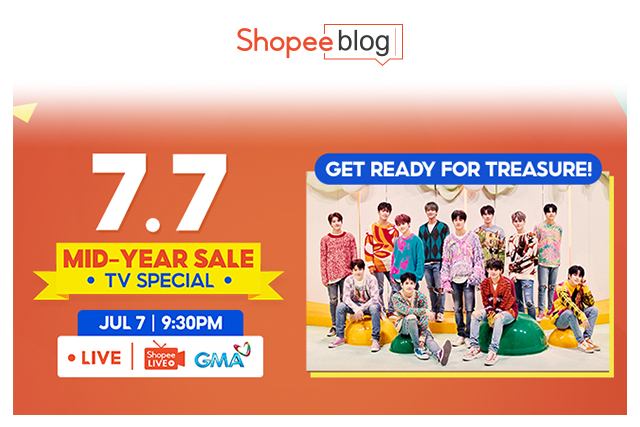 Set your alarms once more for TREASURE’s comeback this 7.7 Mid-Year Sale TV Special! TREASURE is lined up to have three performances again. Sing and dance to their songs; catch the TREASURE K-Pop group performances on Shopee Live and GMA at 9:30PM on July 7, 2021!

See you in the 7.7 Mid-Year TV Special, Shopee fam!

Written By
Tara Gallardo
More from Tara Gallardo
This is the sign to upgrade to an awesome Smart TV today!
Read More